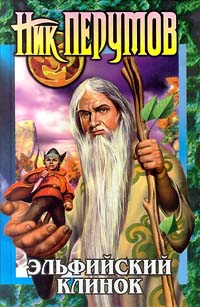 Vol. 1 The Elf Sword
Eksmo 1993, 608 pages
After placing the last dot in the Lord of the Rings, professor Tolkien closed shut the door leading into his world of elfs and gnomes, orcs and goblins, hobbits and people – and threw away the magic key. Only one author – Nik Perumov – was able to find a way into mysterious and secretive world of the Middle Earth. The task was not easy: indeed, each incorrect step threatened to lose the sight of the right path, each incorrect word could destroy the entire world. But in the end, talent prevailed. Tolkien’s world came alive renewed, with never before seen colors and… became the world of Nik Perumov. Planned as a free continuation to The Lord of the Rings, this work developed into bright, captivating, and one of the most noticable epics in the Russian and foreign fantasy. The books tell the story of hobbit Folko Brandybuck, the heir of Meriadoc, and his two dwarven friends, who are trying to protect Middle-earth from a new danger: powerful Olmer, the leader of the Eastern nations, who is gathering the remainder of the nine Nazgûl’s Rings of Power.