rights available: all except Poland, US 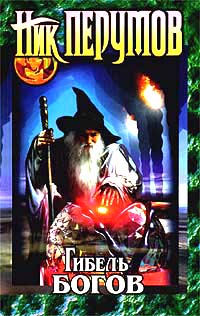 Vol. 1 Godsdoom
Eksmo 1994, 608 pages
And so it was, that the mysterious continent, that we call Hervard, became refuge for humans, elves, gnomes, trolls, and other races, all living a peaceful, measured life. Suddenly, at its green hills, appear a Mage and his Student, that defy ancient gods of Hervard and who wake the Lord of Gloom, who was dozing for so many centuries.

Vol. 2 Warrior of Great Darkness
Eksmo 1995, 544 pages
World of Hervard still remembers the times of old, when armies of Mages went against and resisted armies of Gods, and in the meanwhile, a prince, deprived of throne, wandered along the dusty roads of ancient continent, an unsurpassed master of the sword, named Trogvar, the last hope of Light – Warrior of the Great Dark.

Vol. 3 Land without Joy
Eksmo 1995, 544 pages
How did the inhabitants of Hervard manage to anger their old Gods in such a way that they left this tough world without their care? Indeed, now the fate of the entire world is in the hands of the mortals, moreover not the best, but the most cruelest. And before the new Gods arrive into this land that is subject to them, this ancient continent will remain the World without Happiness.