Chronicles of the Breaking 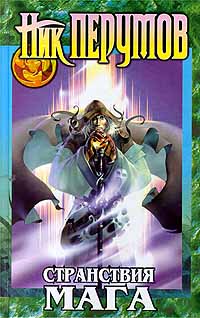 Vol. 1 The Swords
Eksmo 1998, 480 pages
It has been several centuries already, since the Empire, built by humans, who conquered gnomes, elves, orcs, and Danus, is held with blood and fear. The support of the Throne comes from seven Magic Orders – they have unlimited authority over souls and fates of the inhabiting the country citizens and the emperor himself. But the day of the vengeance is close at hand, and so is the day of the great battle, because in the depth of Drungs Woods a holy sword Immel’storn has been awoken and his Diamond „brother“ Dragnir, has been shining brightly in the secret caves of Subterranean Tribe.

Vol. 2 Birth of the Mage
Eksmo 1999, 512 pages
Fess, the native of Valley of Mages and advisor to Emperor of Mel’insk Empire, after the fatal battle of Diamond and Wooden Swords is thrown out into Eviall, one of the worlds of Regulated. Fess has to start everything from the beginning: his memory is distorted, and magic abilities weakened by unknown forces. Time does not wait: prophecies promise fast and terrible end to the his new family. But neither Fess, nor anyone else in the Eviall realizes, that, without their own knowledge, those who are supposed to save worlds had a hand in it – battle mage Klara Khummel‘ and her disciples, lost in the web of paths inside Betweenreality.

Vol. 3 Wanderings of the Mage
Eksmo 2000, part 1/2 each 384 pages
The difficult road, covered in blood of his enemies and friends, by the tears of desperation and grievance, leads the Keeper of Diamond and Wooden Swords, mage and necromancer Fess into Narn, the homeland of Dark elves. But the inhabitants of the magic forest refuse to give him the refuge, seeing future of the black wizard as the apostle of dark, who is likely to bring death to the entire Eviall. There is only one way to check the truthfulness of this terrible prophecy, and Fess accepts it, moving forward, with the pursuers of Holy Inquisition behind, and with the hope for miracle in the soul.